The High Cost of Owning Anime During the Early '90s 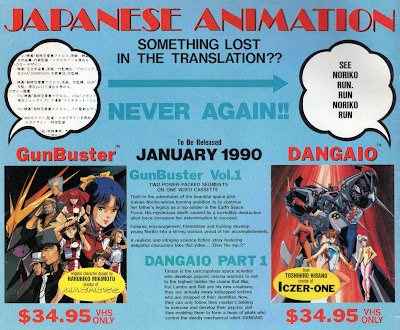 They say everything comes with a price, and anime fans were well aware of the price back in the  '90s. Until recently, collecting Japanese animation has been a costly affair. Fortunately DVD and Blu-Ray prices are dropping. If you're not convinced, take a look at the featured advertisement: GunBuster for $34.95 (keep in mind that there were only two episodes on a single tape and that six episodes were available)! Dangaio ran at the same price - you only get one episode here out of three released). In order to have all six episodes of GunBuster, you would be shelling out $104.85 for three tapes! The same goes for Dangaio.

By the late-90s Japanese animation had become somewhat cheaper, but not by much. Many VHS tapes still cost around $24.99 (some of which only came with an hour worth of content).
Posted by Middle Earth Collectibles at 2:44 PM