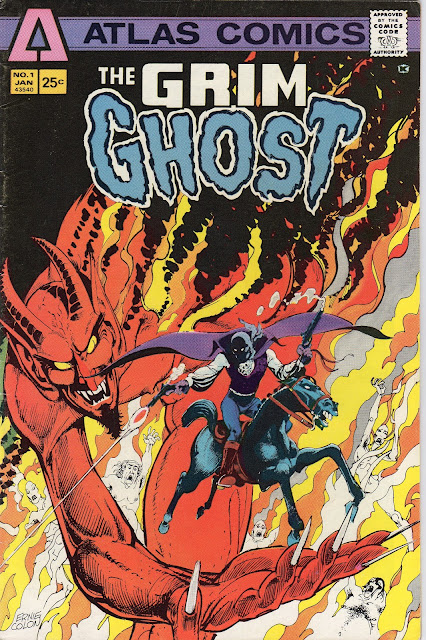 The Grim Ghost #1 published in 1975 by Atlas Comics is a surprisingly good read and would make for a killer movie adaptation. The first issue sets up the origin story, taking place in the 1700s, where a notorious highway robber (the Grim Ghost) is captured by the law and sent to the gallows for his crimes. However, death is only the beginning of this tale, as the Grim Ghost lands in hell. After a warm welcome, Satan makes his new arrival a faithful offer: dedicate himself to collecting evil souls to occupy hell and be spared the eternal torment of languishing in the underworld.

Well, that's an easy deal and off the Grim Ghost goes (a real ghost now) to gather as many evil souls as he can for Satan. Though, instead of sending our 'hero' back to the 1700s, Ol' Scratch delivers him to the 1970s, where evil runs rampant (must have been all that disco and polyester).

Unfortunately, only three issues of The Grim Ghost were published before Atlas folded up and went out of business in 1976 (they opened in 1974). Grim Ghost fans might have a slight ray of hope on the horizon, however. Atlas Comics reopened their doors back in 2010 and announced that they were going to be releasing some new titles. In 2011 issue #0 of a new Grim Ghost comic was published. Sadly, little has happened since and the situation appears somewhat grim for future stories, though we'll keep our fingers crossed.
Posted by Middle Earth Collectibles at 2:26 PM