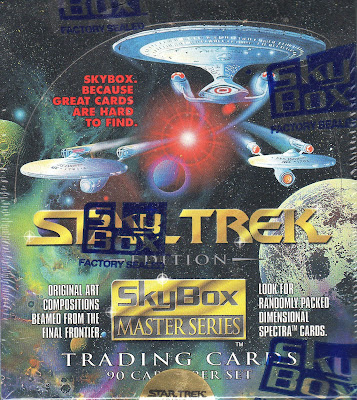 More and more it seems that collecting trading cards has gone the way of the dinosaur, but back in the early-to-mid '90s, that was far from the case.
The Star Trek Edition SkyBox Master Series was released in 1993 and included trading cards featuring original art compositions based on the classic TV series, the motion pictures, the Next Generation, and Deep Space Nine. There were 90 cards to collect and each sealed box came with 36 packs (6 cards per pack).
Posted by Middle Earth Collectibles at 2:48 PM