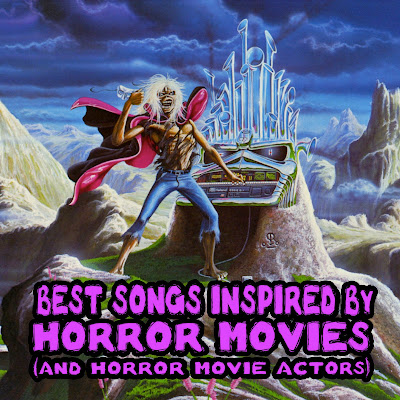 An amazing aspect of the horror genre is its enduring impact on other art forms. Take, for example, music - one might be surprised at just how many songs have been inspired by horror movies!

So get ready, as we guide you through some of the very best songs to have been influenced by the cinematic horrors of the silver screen.


15. THE PHANTOM OPERA GHOST - ICED EARTH
Released on Iced Earth's 2001 album, Horror Show, 'The Phantom Opera Ghost' is not the only track to feature one of the cinema's ever-popular mon-stars. In fact, the entire album is a tribute to them! For instance, The Omen, the Wolf Man, Frankenstein, Dracula, and the Creature from the Black Lagoon each have their respective tribute songs.
14. THE PHANTOM OF THE OPERA - IRON MAIDEN
1980 marked Iron Maiden's debut album and gave horror fans a treat with track 4 - 'The Phantom of the Opera' (it seems only fitting that the Opera Ghost would have remained a popular musical choice).
13. GET OUT OF MY HOUSE - KATE BUSH
'Get Out of My House', the last track on Kate Bush's 1982 The Dreaming album, was said to be influenced by both Stephen King's novel and film-version of The Shining. Though there was no music video for this song, the fan-video that follows serves as a well put-together effort showing the connection between the song and film.
12. CAT PEOPLE (PUTTING OUT THE FIRE) - DAVID BOWIE
This Bowie song was written for the 1982 film The Cat People, starring Nastassja Kinski. Bowie later re-released the song on his '83 album Let's Dance.
11. BAT OUT OF HELL - MEAT LOAF
An odd choice, you say? Not as peculiar as it may initially seem. 'Bat Out of Hell' was actually inspired by Alfred Hitchcock's 1960 film, Psycho. According to Meat Loaf in several interviews, he's stated that the foundation of the song was inspired by a camera shot near the beginning of the film which overlooks a valley and the city below. Another analogy was made regarding how the patrons of the Bates Motel "wish they would have left like a bat out of hell." Though the song itself has absolutely nothing to do with Norman Bates,  'Bat Out of Hell' deserves a spot on this list since, without Psycho, there would have been no inspiration for one of Meat Loaf's most popular tunes and the basis for his best-selling trilogy of albums.
10.  THE WICKER MAN - IRON MAIDEN
Iron Maiden makes it onto our list again, with a song influenced by The Wicker Man what many have called "The Citizen Kane of Horror Movies." Of course, we're talking about the 1973 version and not the blasphemous remake starring Nicolas Cage. Iron Maiden's Brave New World tour in 2000 also featured a mechanical Wicker Man on stage!
9. WHO MADE WHO - AC/DC
In 1986 Stephen King wrote and directed Maximum Overdrive, which featured a rocking soundtrack by AC/DC. Though King later claimed that he was "coked out of him mind" while filming, it can't be said that his musical taste suffered any. After all, the opening to the film, with 'Who Made Who' blasting in the background, sets up the theme of Overdrive perfectly!
8. GOLDEN AGE OF HORROR - RADIO WEREWOLF
Though largely forgotten today, Radio Werewolf encompasses the '80s Goth-rock, post-punk blend of genres. They were also a band constantly swamped in controversy over some of their songs but, whatever the case, 'Golden Age of Horror' evokes the feel and mystery of a bygone age of silver screen scares.
7. BATE'S MOTEL - THE HITMEN
The music video for The Hitmen's 'Bate's Motel' garnered a decent amount of airplay on MTV back in the mid '80s - you know, when MTV actually stood for 'music television' (gasp!).
6. BALLAD OF DWIGHT FRYE - ALICE COOPER
Dwight Frye was a one-of-a-kind actor who today is best known for his role as Renfield in the 1931 Dracula starring Bela Lugosi. Leave it to Alice Cooper to compose such a fitting tribute to one of the Golden Age's best on-screen madmen!
5. PET SEMATARY - THE RAMONES
Legendary punk band, The Ramones, contribute their musical efforts to the 1989 film based-on a Stephen King novel, Pet Sematary.
4. DREAM WARRIORS - DOKKEN
A Nightmare on Elm Street 3: The Dream Warriors is considered by many to be the greatest outing for the diabolical dream master, Freddy Krueger. Whether you agree with that or not, it's hard not to admit that it certainly has the best soundtrack, made so by Don Dokken's repeated high-note yells of "We're the Dream Warriors and maybe tonight, maybe tonight you'll be gone!"
3. HE'S BACK (THE MAN BEHIND THE MASK) - ALICE COOPER
Alice returns on our list with the theme song from Friday the 13th Part VI: Jason Lives. The film also had the immortal tracks 'Teenage Frankenstein' and 'Hard Rock Summer', but 'He's Back' is most notable for it's lyrics pertaining to the one and only Camp Crystal Lake killer, Jason Voorhees.
2. BELA LUGOSI'S DEAD - BAUHAUS
Perhaps the most Gothic song ever written, composed, and transmitted to the ears of mortals. The song not only highlights the vampiric tendencies of Lugosi, but was featured in the unforgettable opening scene of Tony Scott's 1983 film starring David Bowie, The Hunger.
1. THE MISFITS (NEARLY ALL OF THEIR SONGS)
There's no shortage of horror-punk bands, but none have ever topped the Misfits. Take your pick of horror film inspired songs, 'Astro Zombies', 'Night of the Living Dead', 'Vampira', 'The Forbidden Zone' and well...pretty much their entire catalogue of music. For an example, we've included 'Scream' from the Misfit's 1999 album Famous Monsters (yes, we're aware it's post-Danzig). 'Scream' earns extra points from horror lovers as it was directed by George Romero!
Posted by Middle Earth Collectibles at 12:28 PM