Featured Toy of the Day: Godzilla vs. Tricephalon Playset 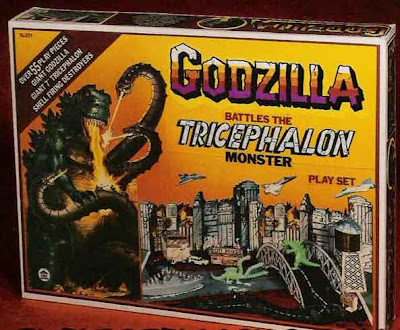 Back in 1978, Godzilla was a hot commodity in the United States. He was that star of his very own Hanna-Barbera cartoon and was being featured in a Marvel Comics series, not to mention an outpouring of toys, including the celebrated Shogun Warriors figure. However, it would be a shame to forget HG Toys ever-impressive "Godzilla Battles The Tricephalon Monster" playset. Toss in a collapsable city play-arena, a handful of army men, tanks, a battleship, jet fighters, a bridge, a generic three-headed monster, and Godzilla himself, and you have hours upon hours of enjoyment.
Posted by Middle Earth Collectibles at 11:27 PM