The Cinematic Batmobile: Batman's Car Through The Years 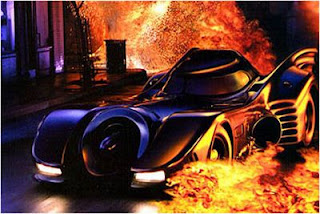 Sure, Batman is an icon, no doubts there - but, over the years, his impressive set of wheels has certainly earned its own iconic status. While it would take the Caped Crusader's trusty Batcomputer to categorize each and every Batmobile ever depicted on the comic page, it's far easier to create a comprehensive list of the live-action versions. So, without further delay...
....atomic batteries to power, turbines to speed...
1943 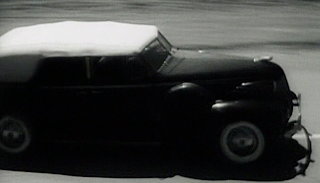 The first Batmobile ever depicted on the silver screen, introduced in the 1943 cliffhanger serial. While the Batmobile is well-known for having a wide range of high-tech features, the most the '43 version had was a convertible top.
1949

By 1949 the second Batman serial, titled Batman and Robin, made its way to theaters. Once again the Caped Crusader opted for a less-than-unique motor vehicle. Ironically, Batman is seen driving the same exact car that Bruce Wayne drives! One would think a billionaire playboy who dresses up in a bat costume at night would at least have two cars. At one point even Vicki Vale questions Batman about why he's driving Bruce Wayne's car...talk about an awkward moment!
1966 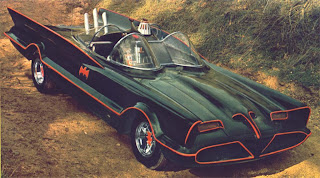 The Batmobile finally received a much-deserved upgrade by 1966 when Adam West burst onto television screens across the country. Still to today, the '60s TV Batmobile is one of the most fondly remembered cars in celluloid history.
1989 / 1992 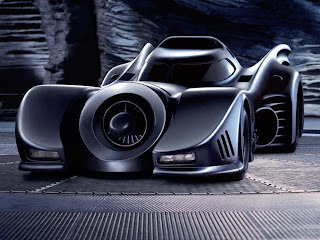 By the late '80s Tim Burton gave Batman a complete overhaul, along with the famed Batmobile. Sleeker, darker, and more technologically equipped than ever before, this armory-on-wheels was a force to be reckoned with. In addition to it's jet turbine-powered engine, the Batmobile could be remotely driven (no more wasting time trying to remember where you parked) and had fold-out armor plating.
1992 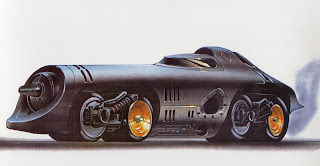 Aside from it's already staggering array of features, the Burton Batmobile was also able to get out of tight situations, by literally breaking-away outer sections of it's body to form the narrow, super-fast Bat Missile.
1995 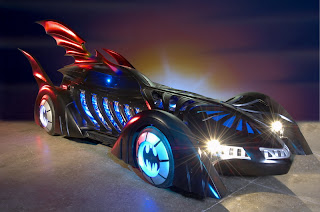 Many Bat-fans agree that the series took a dive once Joel Schumacher stepped in as director. Tim Burton's once expressionistic, Gothic sets were replaced in favor of neon colors, glow-sticks, and a bizarre style that didn't represent anything from the Batman comics. Hence, we have the Batmobile from Batman Forever. Though it could drive up walls, it was short-lived, considering the Riddler blew it to pieces during the Mansion attack scene.
1997 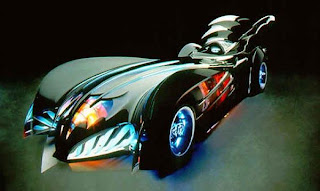 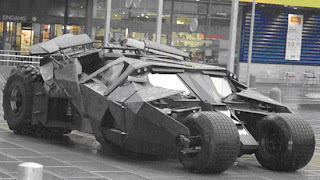 The 'tumbler' became the latest incarnation of the Batmobile in both Christopher's Nolan's Batman Begins and The Dark Knight. While a formidable looking vehicle, it certainly doesn't seem like a genuine Batmobile. It'll be interesting to see  after The Dark Knight Rises, when DC reboots the franchise, what the next variation of Batman's ride will look like.
Posted by Middle Earth Collectibles at 1:36 AM