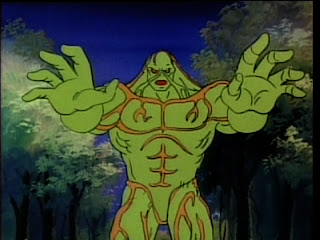 The late '80s/early '90s were filled with some strange cartoons based on rather mature films. For example, both Rambo and Robocop received their own Saturday morning adaptations. Swamp Thing may not have been an R-Rated film-turned-cartoon (the swamp dwelling hero stemmed from DC Comics) but the comic it was based on wasn't kids fare either. In fact, the Swamp Thing comic was one of the first titles to drop the 'Comics Code Authority' logo on the cover due to the graphic content.


While the Swamp Thing cartoon certainly tuned down when compared to the comics, films, and the live-action TV series, it was still a fun ride when it debuted on airwaves back in 1991.

Sadly, only five episodes were ever made before the show faded into obscurity. However, a toyline was still produced, featuring some decent figures - especially that of Skin Man, one of Swampy's 'Un-Man' foes.

It has to be said that one of the most memorable things about Swamp Thing's animated venture was the theme-song spin on the 1960's song "Wild Thing", changed fittingly enough to "Swamp Thing". The complete five episodes were released onto DVD a few years back, though it's long gone out-of-print.

For those interested in checking out the animated adventures of Swamp Thing, the intro will offer a decent representation of what's in store...