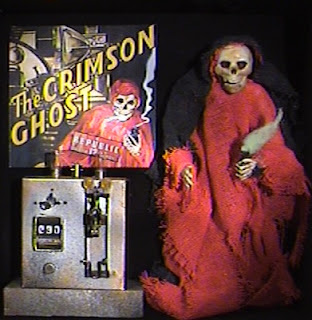 The Crimson Ghost first entered the realm of popular culture way back in 1946 when The Crimson Ghost cliffhanger serial made its way into theaters. While characters from other serials of the era have faded into obscurity, the Crimson Ghost has remained ever-present in the public eye throughout the years. For one, the character has become the mascot for the punk band, The Misfits, appearing on their album covers, t-shirts, and miscellaneous merchandise. Not only that, but The Crimson Ghost was one of the few serials to be colorized in the 1990s! And if that's not enough, fans of the classic Lone Ranger TV show will spot the Lone Ranger himself, Clayton Moore, as one of the Crimson Ghost's villainous henchmen in the serial.
So, what better way to honor the enduring legacy of The Crimson Ghost than for a custom display. Hobbyist and customizer, Davey Horror has set his sights this month on the blood-red shrouded specter. 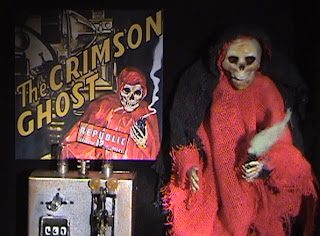 Basing this interpretation of the Crimson Ghost more on the original serial's poster artwork than the actual live-action version, Davey Horror remodeled a grim reaper figure into the crimson-garbed villain. Red cloth was added, along with extra detailing to the skull face and hands. To adhere to the poster (on the left) Davey also built a small bottle with gas (cotton) billowing upwards. The skeletal fingers clutching the bottle had to be tampered with, to get the 'gripping' appearance. 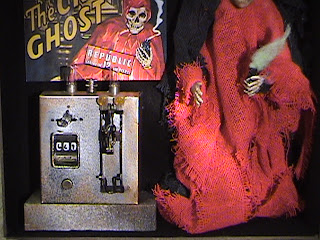 A 1940s style machine was also added next to the Crimson Ghost, complete with working lever and a few non-functional bulbs, buttons, and number dials thrown in.
The display is housed in a black shadow box, complete with glass cover.
Posted by Middle Earth Collectibles at 1:54 PM