For fans of Transformers, the Kabaya toy line is much more than meets the eye.

Anyone who grew up on the G1 Transformers cartoon and Hasbro's original toyline will find these Kabaya figures to be a treat. And now with Transformers: Dark Of The Moon opening soon, the Transformers craze is about to begin once again!
However, you won't find these toys at the local Toys R' Us. Kabaya figures are largely unheard of outside Japan, and are often available only at specialty stores in the United States.
First, for the uninitiated, a brief overview of the Kabaya Foods Corporation:
Kabaya was formed in Japan in the 1960s, producing a line of small toys, figurines, and plastic model kits that came with candy or gum. Kabaya struck deals with a variety of brands for their candy toys - but one of their most popular came in the 1980s with Transformers. This partnership with the Transformers brand continues even today as new candy toys of the Autobots and Decepticons continue to be produced yearly.
While the older series of Kabaya Transformers figures are now pricey and extremely hard to get, the latest line of candy toys is still available.
The first wave in the modern "Transformers Gum" series featured G1 Optimus Prime, Star Saber, and Henkei Convoy. 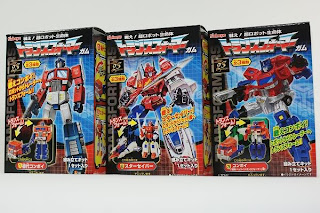 This initial line was dubbed the 'Convoy Assortment' (Convoy was Optimus Prime's name in Japan) and was released in 2009.
Each package included gum and the transformable toy - though the figures were closer to a cross between model kits and toys. Assembly was required, however no glue or paint needed. Inside each box the parts came on those little plastic 'spruces' that many Japanese plastic model kit pieces are often attached to.

The parts could be snapped together and the plastic was already color molded to that of their cartoon counterparts. Even more detail could be added by applying the stickers from the included 'sticker sheet'. Once each figure was assembled in robot mode, the Transformer would stand at approximately 4 inches tall.
Like any real Transformer, these toys wouldn't be worth a penny to their name if they couldn't actually transform! G1 Optimus Prime and Henkei Convoy could be converted into their alternate truck modes, while Star Saber could be switched from robot to jet mode. The transformations differ from what is expected of Hasbro's Transformers, however. The Kabaya figures transform through means of pulling off parts and attaching them to different areas of the figure, making them a little more of a 'part-former' than a true 'trans-former'. With that said, for what is in actuality a candy toy, this is still a remarkable feat. 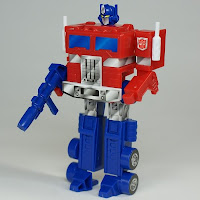 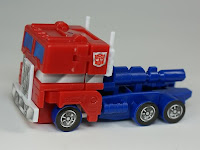 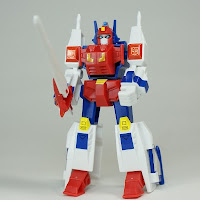 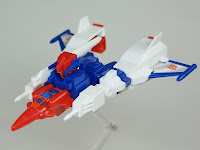 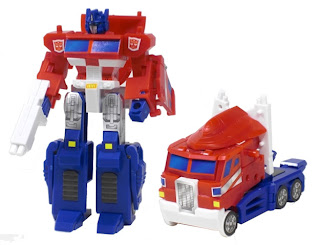 The second assortment of Transformers Kabaya figures was released a year later and featured Ultra Magnus, Prowl, and Jetfire. 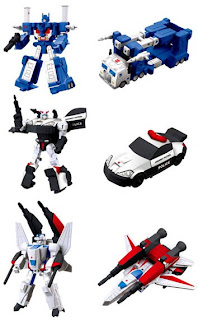 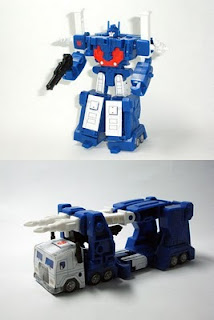 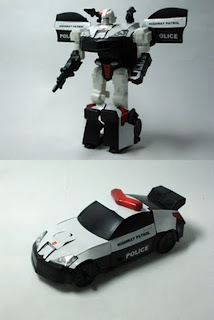 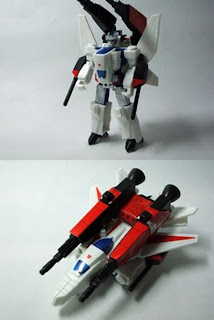 The third and final line (so far) was released in 2011 and consisted of Super Ginrai and Godbomber (known as Powermaster Optimus Prime in the United States), both of which were featured in Japan's Transformers: Masterforce animated series from the late '80s. A first for the Kabaya line was an added-feature in which the Ginrai and Godbomber toys could combine to create God Ginrai.
Another first for the third wave was the appearance of a Decepticon! Fan-favorite, Starscream was included in the line-up (the best selling out of the third set, for obvious reasons). 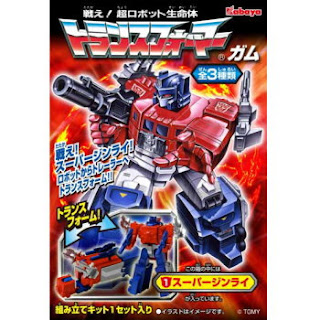 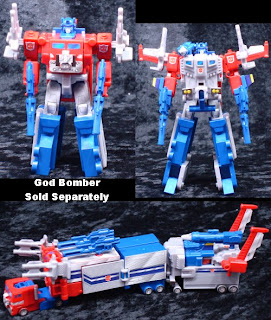 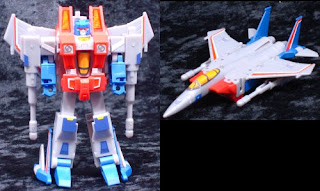 As of this writing, the third wave is currently the easiest to obtain, with the first and second waves becoming more and more rare. However, a limited stock of the complete first wave is still available at Middle Earth Collectibles. Those who would rather not purchase a set could also purchase G1 Optimus Prime, Star Saber, and Henkei Convoy separately.
Posted by Middle Earth Collectibles at 12:18 AM