Godzilla may have originated in Japan back in 1954, but today he's a global icon. The King of the Monsters has conquered nearly every form of entertainment known to exist, having appeared in 28 Toho Studios films, an American adaptation (a remake is currently in the works), Marvel, Dark Horse, and IDW have each played host to a Godzilla comic series, and the Big-G has starred in both a Hanna-Barbera cartoon and another animated series based-on the 1998 American film. Beyond that, Godzilla has claimed his place in the Guinness Book of World Records as the longest running film series by a single film-studio, received an MTV lifetime achievement award in 1996, and was given a star on the Hollywood Walk of Fame in 2004.


So prepare yourself as we look back at Godzilla's impressive history and examine his Top 10 Battles! Get ready to crumble!! 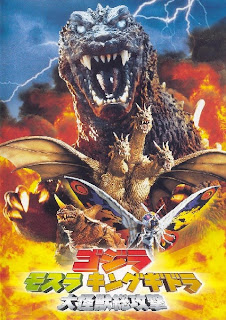 So, Godzilla, Mothra and King Ghidorah: Giant Monsters All-Out Attack (often referred to as GMK, due to it being one of the longest titles ever!) may have had its share of battle scenes, but one of the most memorable features a monster withheld from the film's lengthy title: Baragon.
In the 2001 film, Baragon is the first of the three 'mythical beasts' (Mothra and Ghidorah are the other two) who confront the King of the Monsters in an effort to save Japan. While none of the monsters fare very well against Godzilla's immense strength, it seems that Baragon puts up the most valiant fight (at least more-so than Mothra did in this particular outing).
The battle between the giants is entirely one-sided in Godzilla's favor, but it presents a situation often-unseen in kaiju films: a monster so hopelessly outclassed that there's no hope for victory. The fight between Baragon and the white-eyed Godzilla is staged-well and occurs at a fast-and-furious pace from the first frame to the last. Godzilla's sheer size alone compared to Baragon is remarkable, and needless to say,

it ends poorly for the four-legged monster. Baragon is thrown about, launched into the side of a mountain, stomped on, and finally disintegrated by Godzilla's atomic ray. 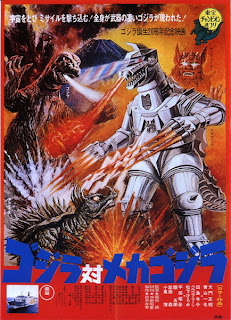 Godzilla didn't see much action in 1974's Godzilla vs. The Cosmic Monster (aka Godzilla vs. The Bionic Monster/Godzilla vs. Mechagodzilla). He had a brief scuffle with his robotic double in the beginning of the film, then, after being wounded isn't seen again until the climax. Of course, Mechagodzilla has to fight something - so King Caesar was introduced (a monstrous mix between a floppy-eared dog and a wingless gargoyle). Being a Godzilla film, Caesar can't hog all of the glory and is little more than cannon fodder to showcase the devastating might of Mecha-G until the real Godzilla shows up.
Once Godzilla surfaces from the water, he engages in a life-or-death struggle with his mechanical duplicate. It's certainly a battle to remember, especially when Mechagodzilla unloads his entire arsenal on his foe. It seems the genuine article is no match for the bionically 'improved' monstrosity, until Godzilla puts his radioactive-induced powers to the test by turning himself into a kind of 'super-magnet'.
Now, with Godzilla having transformed into the world's largest magnetic conductor, he draws Mechagodzilla to him and snaps the cosmic monster's head off.
This ranks as #9 in Godzilla's illustrious career of battles for two very important reasons. First, it's one of the rare occasions that Godzilla actually dismembers his foe (it does happen again, but it's not often), and second, it was such a great final fight that it's nearly duplicated, decapitation and all, in the film's sequel, Terror Of Mechagodzilla. 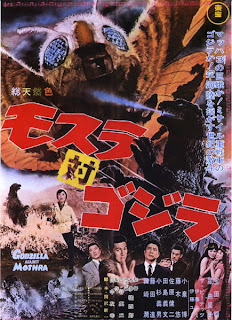 Many consider 1964's Godzilla vs. Mothra (aka Mothra vs. Godzilla, Godzilla vs. The Thing) to be the artistic zenith of the series, and with good reason. Everything from cinematography, to music, to special effects are top notch in this Toho Production - and Godzilla vs. Mothra would also mark the last time Godzilla would be portrayed as truly 'evil' or a villain in the Showa series (Showa was the first run of Godzilla films, until the '80s). In the next film, Ghidrah: The Three-Headed Monster, Godzilla would side with both Mothra and Rodan to take on a mutual threat.
Godzilla's first battle with Mothra ranks as #8 on our list. The winged-behemoth makes at attempt to stop Godzilla from destroying her unhatched newborn(s), in this well-shot scene. What's interesting about this battle is that it doesn't take place at the film's end, but around the middle.
To defend her egg, Mothra puts up quite a fight - hammering Godzilla with her wings, gripping onto his tail and pulling him to the ground, and showering him with golden dust. It's all for naught, however, as Godzilla ultimately wins the day.
One of the things that makes this battle rank so high is that, unlike many typical 'kaiju fight' scenarios - the fate of something immediate actually hangs in the balance. Sure, Godzilla fighting Megalon or Gigan is exciting, but there's not an immediate consequence if a monster should lose, aside from...well, losing. Sure if Godzilla didn't beat Ebirah, the Sea Monster, the giant-lobster would go on to spread chaos in the future - but it's not a direct result. In the case of Godzilla and Mothra's battle, the result of Mothra's loss would cause her egg to be destroyed. Overall, this ups the ante of the battle and makes this fight all the more thrilling for fans of the genre. 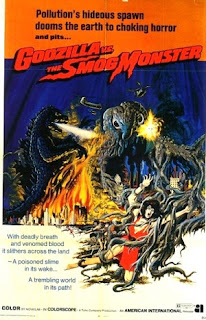 The psychedelic-'60s bled into the early 1970s for Godzilla, when he tackled the hideous horror of Hedorah! The film's climatic battle atop Mt. Fuji is Godzilla's Top Battle #7. Truly everything, including the kitchen sink, was thrown in to the last thirty-minutes of the film. We've got Godzilla being buried under a land-slide of sludge, Hedorah transforming from flying-mode to an upright creature, Godzilla's eye getting shot with sulfuric pollution, and even the Big-G flying! Yes, you did read that right. Godzilla flies.
A great stand-out addition to Godzilla's final confrontation with Hedorah is the human  element. Typically when the monsters start fighting, the human characters are cast to the wayside. Not here. The humans build electrified walls intended to dry up and decompose Hedorah. Unfortunately, Godzilla's human allies are as incompetent as always and fail to get their new weapon to function properly, that is, until Godzilla provides a helping hand - or, more accurately, a helping atomic ray. Nevertheless, it's through the combined efforts of Godzilla and his human pals that Hedorah is finally destroyed.
6. Godzilla's Greatest Kong-frontation
(King Kong vs. Godzilla / 1962) 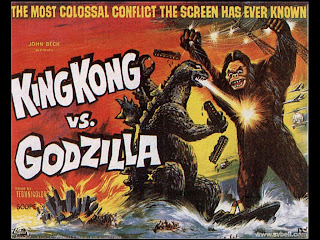 What list of Godzilla's finest battles would be complete without the inclusion of one of Toho's most successful films, King Kong vs. Godzilla. The battle in question takes place at the end of the film when both Goliaths battle to the death. Really, there's not much more that can be said. The reason why it ranks #6? Because having Kong and Godzilla fight it out on Mt. Fuji is without a doubt one of the most memorable moments of the entire G-Franchise.
The final battle gets bonus points for the years and years of controversy that stemmed from Forest J. Ackerman's Famous Monsters of Filmland, when Forry claimed that there were two endings to the film - in the Japanese version, Godzilla wins and in the American version, Kong is triumphant. In actuality, the film only had one ending.
5. Final War
(Godzilla: Final Wars / 2004) 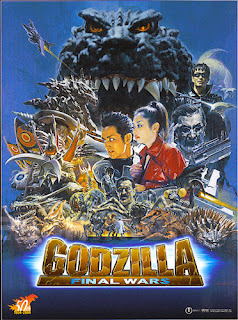 Godzilla: Final Wars is filled with monster battles (at least in the film's second half, when Godzilla shows up) though none of the battles are all that long (special mention for an exceptional battle goes to the Godzilla vs. Americanized 'Zilla scene in Sydney Australia). Pretty much, through the course of the film, none of the monsters can compare to the sheer power of Godzilla, save for Monster X. The battle has Godzilla outclassed, even prior to Monster X's transformation into Kaiser Ghidorah.
Posted by Middle Earth Collectibles at 12:59 AM