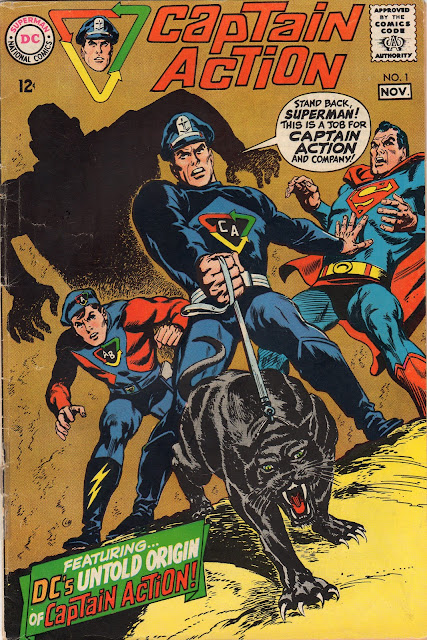 Published in November 1968, this marked Captain Action's first foray into the comic world. Prior to being featured in his very own DC comic, the character started out as an action figure, initially released in 1966. Various costumes could be purchased for the figure (Spider-Man, Lone Ranger, Batman, Superman, Green Hornet, etc), and later the inclusion of Action Boy (Captain Action's sidekick) and his dreaded nemesis, Dr. Evil, would make their way into the popular toyline.
Since the comic book was being published by DC, it's a given that none of the Marvel heroes would appear. Worth mentioning is that Captain Action #1 had an all-star cast of talent behind it, including artist Carmine Infantino, inker Wally Wood, and writer Jim Shooter!
Posted by Middle Earth Collectibles at 1:24 PM