VHS OF THE WEEK: Godzilla vs. The Cosmic Monster 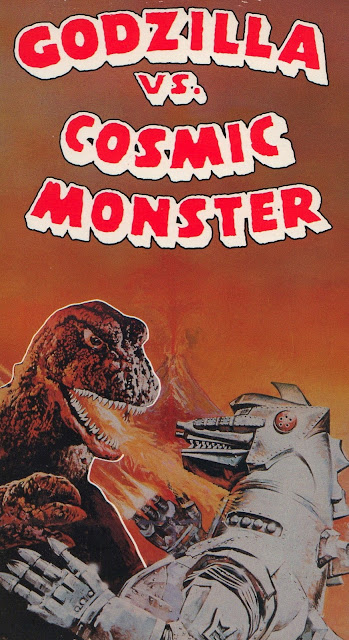 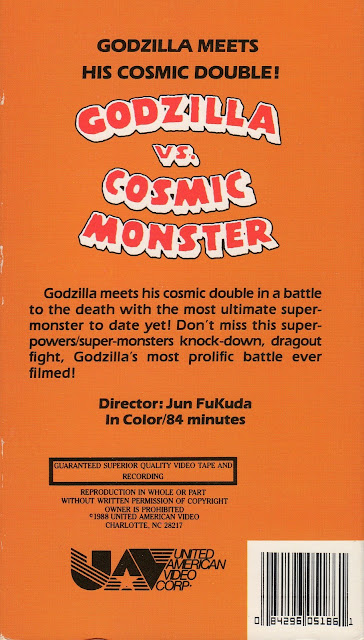 VHS RELEASE DATE: 1991
"Godzilla meets his cosmic double," the back of the VHS cover states not once, but twice! We'll technically it's his mechanical double, because the Big-G takes on MechaGodzilla in this outing. In the early '90s a number of other VHS companies had labeled this film with its correct title, "Godzilla vs. MechaGodzilla." United American Video Corporation mixed things up a bit, which may have confused buyers. Back in 1991 people weren't frequenting the internet, so for an uncertain G-fan, Godzilla vs. The Cosmic Monster may have very well sounded like a different film from Godzilla vs. MechaGodzilla, only to find out when they got the VHS home that it was the same movie! The generic description on the back of the box doesn't help matters and one can't put too much stock in an United American VHS cover (back in February we posted their misleading box art for Godzilla vs. Megalon). However, they nailed the cover here, which is nothing short of fantastic.

Back in the early-to-mid '90s this VHS was found in a bargain section of a video store for $2 (brand new at the time, too!). What's truly amazing is that the film is in SP mode, meaning that it's the best quality one could have had on VHS.
Posted by Middle Earth Collectibles at 2:07 PM