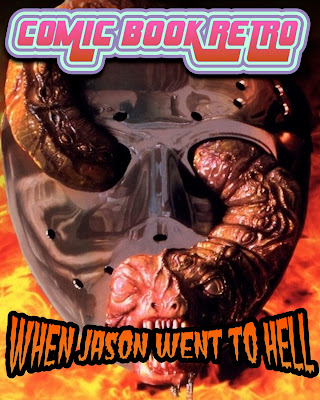 By the early '90s Paramount was no longer running the Friday the 13th franchise, having sold off the character's rights to New Line Cinema. Not wasting much time, Jason Goes To Hell: The Final Friday was pushed into production. New Line had been notorious for financially milking the Nightmare on Elm Street franchise with marketing tie-ins, so it was only natural that they would do the same with Friday the 13th. Lo and behold, a comic book adaptation of Jason Goes To Hell hit the stands in '93.
Published by TOPPS, the Jason Goes To Hell comic adaptation was set as a three-issue mini-series. It managed to stay fairly close to the film and, surprisingly, makes for a better movie-to-comic adaptation than most of these ill-fated transitions often do. Each comic was polybagged (remember that awful '90s trend?) and included not one but three 'exclusive TOPPS trading cards!'
TOPPS often tried some gimmick with their issue #1's and why should Jason be any exception? Not only were three trading cards being offered up (they probably counted the polybag as a 'bonus' too) but the cover GLOWS-IN-THE-DARK! Why? Because apparently, this comic is 'hotter than hell!' Though a glow-in-the-dark cover seems borderline ludicrous today, any comic fan of the '90s should remember the horde of hologram, silver imprint, variant, and glow covers. To it's credit though, Jason Goes To Hell #1 seems like one of the only comics where a glow-in-the-dark cover would be a good idea.