VHS OF THE WEEK: Godzilla vs. Megalon 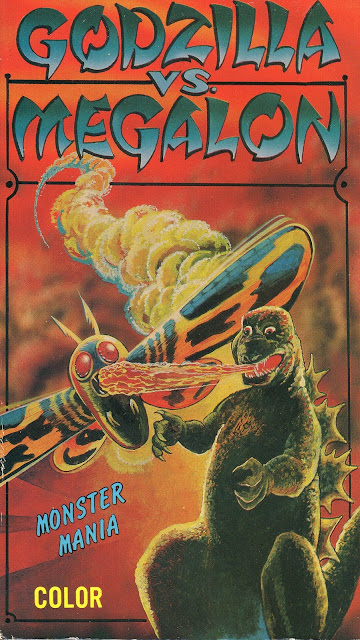 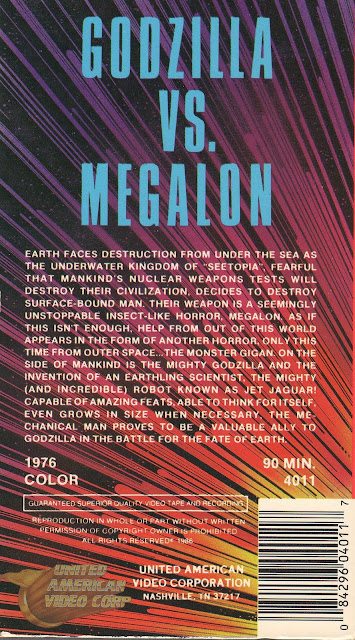 VHS RELEASE DATE: 1991
It's no secret that Godzilla films were notorious for having bizarre VHS cover art. In many cases, the artwork didn't even correspond to the actual film. That's the case here with United American Video Corporation's release of Godzilla vs. Megalon. The cover artwork clearly depicts Godzilla in combat with Mothra. It would seem that United American figured no one would notice the switch (both Mothra and Megalon were bug-like monsters), or maybe that customers would be inclined to think the monster moth made an appearance.
The description on the back of the VHS is surprisingly accurate given the nature of this release. The film itself doesn't fair quite so well, considering it's recorded in the inferior EP mode. This is despite the label in the back stating "Guaranteed Superior Quality Video Tape and Recording." As soon as the tape is removed from the slip, large text is plastered on the cassette: FOR BEST PICTURE ADJUST VCR TRACKING CONTROL. What's also odd is that the back of the cover has Nashville, TN beneath the United American Video Corp name, when on the actual tape itself, it's labeled Charlotte, NC.
Godzilla vs. Megalon has long been in the public domain, making it one of the most widely available G-films in the United States. At the end of the day, any qualms about the quality of the tape or misleading cover art can easily forgiven, considering this home video cassette was purchased in NYC back in the early-to-mid '90s for a whopping $2!
Posted by Middle Earth Collectibles at 10:31 PM