Movie Rumors from 1990: A Glimpse into the Pit of Development Hell PART II 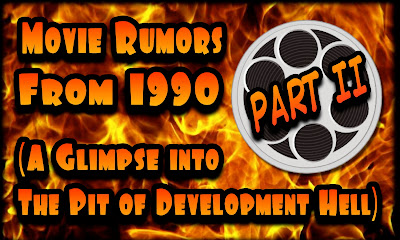 Last week we began our Movie Rumors from 1990 feature and, in the process, covered Iron Man, the Justice League mini-series, and Jonny Quest. Though Iron Man was brought to the screen in 2008, the other two projects continue to languish in the fires of Development Hell. Will today's selection fare any better? Let's find out... 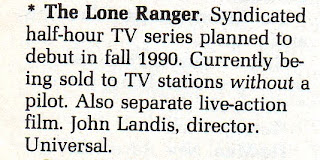 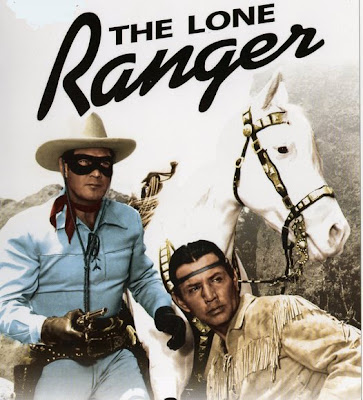 When it comes to The Lone Ranger, it's important to remember one thing: if Clayton Moore isn't playing the masked crime-fighter (as he so perfectly did in the 1950's TV series), the project is probably doomed to fail. In 1990 Universal had plans to release a new Lone Ranger series along with a live-action film helmed by director, John Landis. It's unknown how far both the series and film went into pre-production, but one can guess that it didn't go much beyond the screenwriting process.
Since the '50s every Lone Ranger adaptation has been cursed for failure. Back in 1961 CBS released a pilot episode of The Return of the Lone Ranger, starring Tex Hill as the title character. It was immediately shot down.
Fast forward to 1981 and the release of the theatrical film The Legend of the Lone Ranger, starring Klinton Spilsbury. It became a critical and commercial failure.
The latest attempt for a new Lone Ranger adaptation came in the form of a 2-hour TV pilot that aired on the WB in 2003. Starring Chad Michael Murray as the titular hero, the pilot movie tanked and was shelved.
Since 2002 rumors of a big-budget Lone Ranger film have bounced around from Columbia Pictures to the Weinstein Company, to Disney. Johnny Depp has since expressed interest in participating in the film. The project was temporarily abandoned in 2011, due to the lackluster performance of the semi-western Cowboys and Aliens, but has since been given a May 31st, 2013 release date. 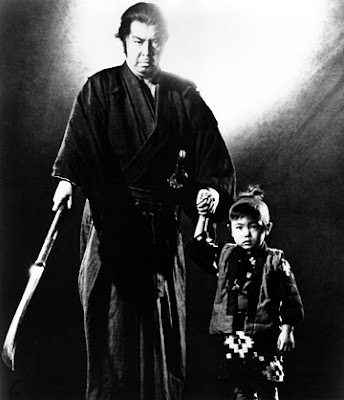 From Lone Ranger to Lone Wolf...Lone Wolf and Cub that is! This popular Manga was first published in Japan back in 1970 and soon spawned a series of faithful films (6 of them between 1972 and 1974!) and a television series in '73.
Lone Wolf and Cub would reach North American shores in 1980, though in the form of Shogun Assassin - an 86 minute feature that combined the first two Japanese films into one.
In 1990 there was word that an American big-screen adaptation was underway with a script written by Bill Wisher (Terminator 2, Judge Dredd, 13th Warrior). No further word became of the proposed film until 2003 when Darren Aronofsky was said to be developing his take on the Lone Wolf and Cub series. The rumors quietly died out and hopes of an American Lone Wolf faded, though an updated television series aired in Japan from 2002 to 2004. 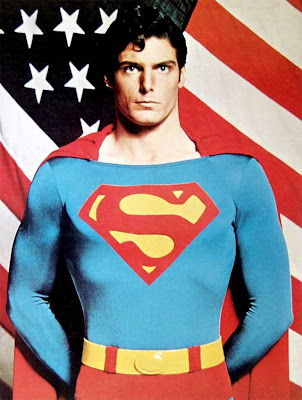 To think that back in 1990 there was still hope of a Superman V. That changed by the mid '90s when everyone was scrambling for a complete reboot with a darker edge (titled Superman Lives). Overall, Superman has to be of the most expensive projects in the history of Hollywood. Heck, they paid Nicolas Cage $20 million to be in the movie - and it never happened! Talk about throwing money away! On the other hand, few would argue that Cage as the Man of Steel would have even worked. For any Nicolas Cage fan who wishes to debate this and claim otherwise, we present you with Exhibit A: 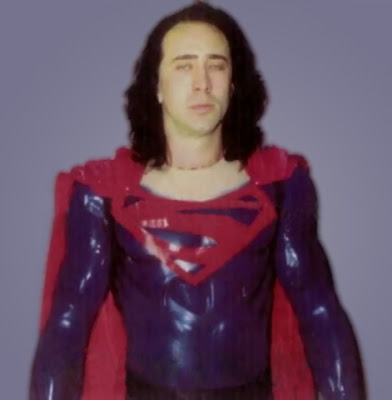 In 2006 Brian Singer gave the world Superman Returns. It's sad to say that, despite all the years that went into bringing Superman back to the silver screen, Superman IV: The Quest For Peace has more going for it than Returns. Regardless of IV's ridiculous storyline, at least it's not boring. It's too bad, because Brandon Routh was a believable Superman.
A new Superman reboot is currently underway, directed by Zack Snyder and set to be released in 2013. As of now, it's going to be titled Man of Steel.
To be continued!
Next week we'll cover three more projects that were rumored in '90...
Posted by Middle Earth Collectibles at 2:14 PM