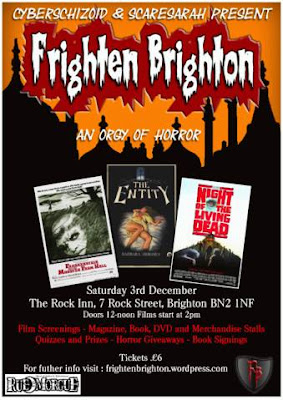 Our friends in the UK are at it again...a fantastic triple feature of classic horror films! Any horror fan fortunate enough to be in Brighton on December 3rd has no excuse not to be at this event! Show your support and attend - there's no better way to spend a Saturday!!
Cyberschizoid and Scare Sarah, the team behind the successful Classic Horror Campaign film screenings across the UK present the first in a series of Brighton based horror events.
Frighten Brighton is taking place at The Rock Inn, Brighton on Saturday 3rd December from midday. The event will consist of a horror movie triple bill alongside a Macabre Market, a book signing from local horror writer N.J. Hallard (Breaking News : An Autozombiography), a horror quiz, fancy dress competition and free giveaways courtesy of Rue Morgue, the world’s leading horror culture magazine.
The horror screenings begin at 2pm and feature Frankenstein & the Monster From Hell (1974), The Entity (1981) and Night of the Living Dead (1990) all for only £6 admission per person. Entrance to the Rock Inn pub and Macabre Market are free. Watch out for a specially filmed introduction by Hammer Films star Shane Briant and a sequel to Frankenstein & the Monster From Hell.
For further information please visit:
http://frightenbrighton.wordpress.com/
You can book tickets at: http://www.wegottickets.com/event/138888
Posted by Middle Earth Collectibles at 2:31 PM