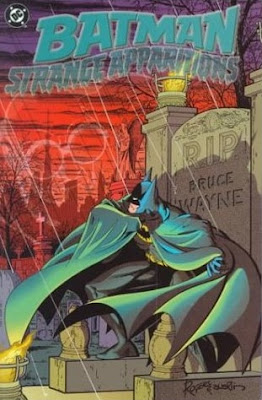 Want your very own signed and numbered copy of this rare, out-of-print Batman TPB?
A very limited amount is currently available at Middle Earth Collectibles.
Strange Apparitions deals with a number of elements coming to a head at one point in Batman's life. A new villain appears in Gotham City, Doctor Phosphorus, who terrorizes the town by contaminating the water supply. He also blackmails the city council (whom he had previously held ties to), demanding that they remove Batman from his path. This political pressure is fronted by Rupert Thorne, local corrupt boss. Along with the two new ones, an older, forgotten Batman foe appears, the nefarious Hugo Strange, who both discovers Bruce Wayne's identity, and usurps it. Batman also comes into conflict with Deadshot and The Joker. All of this is made much more complicated by Wayne's introduction to Silver St. Cloud, a local socialite who just might be the first person to truly penetrate his emotional barriers.Batman: Strange Apparitions collects DETECTIVE COMICS issues 469-476 and 478, 479 from 1977-1978.This long out-of-print trade paperback from 1999 has been signed on the cover by writer Steve Engleheart and artist Terry Austin. This signed edition also comes sealed in plastic with an official Dynamic Forces, Inc. seal to ensure that it hasn't been opened - and includes a numbered certificate of authenticity!Limited to 500 signed copies!DC Comics. 176 Pages. Trade Paperback.
Use our promo code FALLSALE and get 25% off!
Coupon valid until 12/1/11
GET YOUR COPY HERE!
Posted by Middle Earth Collectibles at 12:51 AM