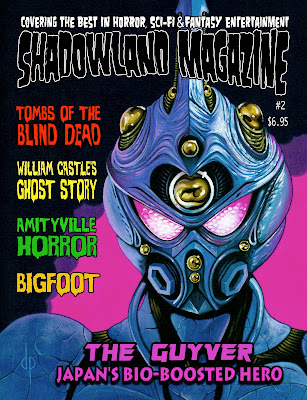 The Magazine That Covers the Best in Horror, Sci-Fi & Fantasy!
Issue #2 Contents:
Out of Control
A retrospective on the manga, anime, and live-action adventures of Japan's bio-boosted hero, The Guyver.

Dark Heroes
An exploration of the darker comics of the '80s and '90s, all of which pushed conventional boundaries of the medium.

William Castle on TV: Ghost Story
William Castle, the Master of the Macabre, has directed his share of memorable horror films - but what of his television venture, Ghost Story? We uncover the details of Castle's small-screen outing.

Retro Treasures
A look at the horror, sci-fi, and fantasy pop-culture icons that graced the coveted covers of cereal boxes.

Tombs of the Blind Dead
The terrifying Templars rise once again as we gaze back at the legendary Blind Dead series of horror films from Spain.

Bob Mitchum Meets Bigfoot
When it comes to cinematic appearances, even Robert Mitchum would agree that Bigfoot has more than a foot above the rest.

Beyond Fantastique!
Movie reviews of Cyber Ninja, House of the Devil, Eyes of the Mothman and book reviews of A Critical History and Filmography of Toho's Godzilla Series, and Romancing the Vampire.
COMING LATE OCTOBER / EARLY NOVEMBER
PICK UP ISSUE #1 NOW AT:
www.ShadowlandMagazine.com
Posted by Middle Earth Collectibles at 1:41 AM