Does the latest episode of Thundercats roar or cough up a hairball? You won't need the Sword of Omens' ability to bestow "sight beyond sight" to find the answer. Just keep reading... 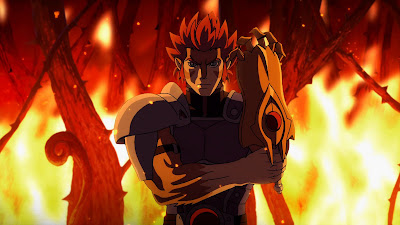 Warning: first off, I need to get this off my chest. You may however skip the rant, and go directly to the review below, which I've marked *REVIEW* to avoid potential confusion. If however, you're partial to the cartoons of the '80s and long for the days of olde, this rant might be right up your alley. The '80s Thundercats cartoon was always a favorite. It was made back in a time when they knew how to make cartoons, not the dumbed-down rehashes that kids get today. I had recently seen a preview on Cartoon Network for Adventure Time followed by a promo for The Marvelous Misadventures of Flapjack and I cringed, feeling awash with sympathy for today's youth, knowing that most will never sit down and watch the original Transformers, G.I. Joe: A Real American Hero, JEM, or the countless other shows that shaped the kids of the '80s. Back then, it truly was quality programming - whether or not they were blatant toy commercials. Many cartoons from the '80s still hold their own more than twenty years later. But, perhaps, I'm just being too cynical. Maybe Adventure Time and The Marvelous Misadventures of Flapjack are both great shows, along with Ben 10, Gumball, Regular Show, and so on. I don't know. I have only seen a few minutes here and there of some of these programs and...well, I'm left indifferent.

Though looking back, as a kid, I don't think I would have enjoyed any of these new 'kiddie' shows. I was always more enchanted with cartoons of the action variety (i.e. Thundercats, Centurions, He-Man and The Masters of the Universe). Today, only a handful of these 'action shows' still exist on television. Young Justice, The Avengers: Earth's Mightiest Heroes, Batman: Brave and The Bold, Star Wars: Clone Wars, and lastly the newest incarnation The Thundercats.

Young Justice certainly has more 'older' thematic qualities than say the former Teen Titans, but let's face it, it's a far cry from the dark, brooding Batman Animated Series of the '90s. Batman: Brave and The Bold is fun, I enjoy it and love the frequent nods to the classic comics but again, it's no Batman: TAS. The Avengers is well done on many levels, as is Star Wars: Clone Wars - but sadly, what it boils down to is hardly a handful of shows to chose from.

Now, we come to the 2011 version of The Thundercats. I am completely and utterly amazed by this show. It has one thing that I felt most films, comics, and cartoons currently lack: heart. It would be impossible for me to applaud and praise the people who are behind the new Thundercats enough. My reservations about the character designs that I had seen months ago, prior to watching an actual episode have been lifted. Each of the episodes thus far have showcased great animation, exceptional fight scenes, a triumphant musical score, excellent voice acting, well-defined characters, and most of all: wonderful, imaginative plotlines. I've seen most of the big screen blockbusters in the theater this year, and while I found many to be enjoyable breaks from reality, ultimately I was always left with a feeling of emptiness, in the sense that I wanted something more...maybe some extra character development or a defining moment that left me wide-eyed...just something that raises it above the other films. I've realized that most movies today don't do that anymore. The paint-by-the-numbers world of Hollywood doesn't allow for amazement and wonder on such a scale quite like it used to. Rehashes. That's what studios churn out and what general audiences seem to want. Ironic, that a cartoon - a remake to boot - offers the heart that live-action $200 million dollar Hollywood spectacles lack. Nobody in Transformers: Dark of the Moon seemed like a real, palpable character. More like cardboard cutouts that I've seen countless times before; mere throwaways with no sense of purpose, destiny, or goals. I watch the new Thundercats and every character seems to breathe motivation, desire, hope, and, at times, even despair. Welcome to 2011, where a single episode of a cartoon has more substance than the whole of a summer blockbuster film. 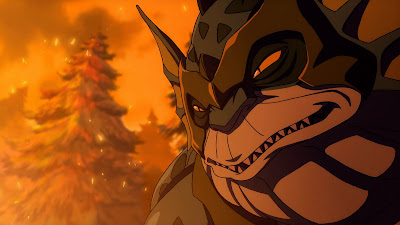 The episode starts out with the Thundercats on the run from Slithe and his Lizard Army. Finding a safe place to hide, the viewer is allowed to witness some character development and inner workings of the characters. While Wilykit and Wilykat play, Lion-O and Cheetara share a tender moment. It's clear that the burden of leadership and responsibility weighs heavily on Lion-O. Above that, he has lost hope and a sense of faith in the Thundercat's mission, adopting a "what's the point?" attitude. He softly utters the words, "In the blink of an eye," while reminiscing about the recent events that had transpired. Though the words will have greater impact for him by the episode's end.
The Thundercats become aware that the Lizard Army is closing in. Already the team's inner-turmoil is building as Tygra wants to face the mutants, but Lion-O declines, suggesting a temporary retreat despite Tygra's disapproval. They head for the Brambles, an enclosed, dome-like section of thick forest, almost labyrinthine in appearance. 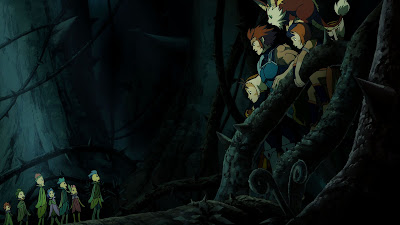 It is within the Brambles that the Thundercats meet the Petalars, a peaceful race of creatures that resemble small humanoid flowers. A young Petalar, Emeric, is quick to befriend Lion-O. It soon becomes apparent that the Petalars age rapidly, in fact, their whole life is lived within the span of 24 hours! Lion-O finds this out first hand when he sees Emeric grow from 'child' to 'teenager' in moments. 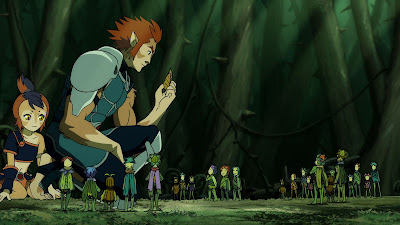 The Thundercats aid the Petalars in trying to find a way out the Brambles, which is far easier said than done. What seems to be a futile endeavor is only compounded by Slithe, who orders his Lizard troops to set the whole place ablaze. 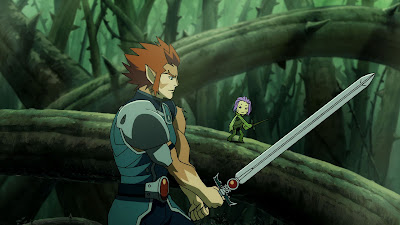 Fortunately, the flames create an updraft that allows the Petalars to escape through the top of the Brambles' dome-like entrapment. Emeric however has aged to the point where he is now dying, yet through his aging he has gained wisdom to which he bestows upon Lion-O concerning hope and faith. Realizing that he can't give up and that "it all is worth something" Lion-O finds his resolve stronger than ever. Together with Tygra, Cheetara, Wilykit and Wilykat, he leads them into battle against the Lizard Army. 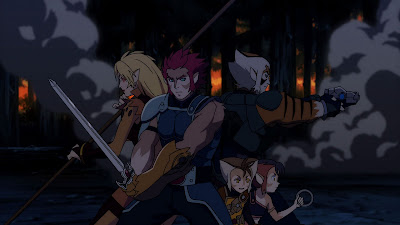 Though greatly outmatched, the Thundercats put up a valiant fight, until being cornered by the Lizard Army's mech-soldiers. Suddenly, a shadow-clad vehicle speeds to their rescue. Equipped with powerful armament that overwhelms anything the Lizards have, the vehicle wipes out the army's mechs and sends Slithe into retreat. 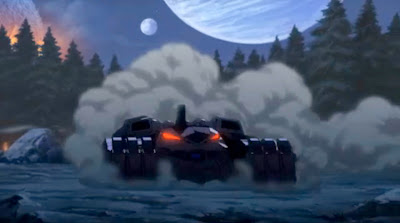 The vehicle, an 'armored tank', swerves to a stop and an equally shadowy figure emerges from inside: Panthro. 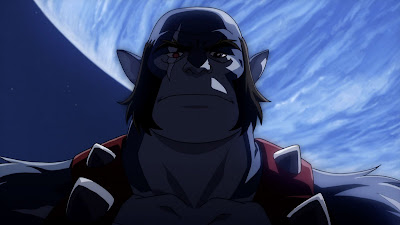 And with that, the fourth episode of the new Thundercats cartoon comes to an end. The theme of Lion-O losing his faith in the Thundercat's mission and questioning "what it's all worth" was magnificently done. Never was it heavy handed or played out in an overdone 'seen-it-a-million-times' cliche. Lion-O's journey in the episode seemed genuine and had real emotion behind it. The addition of the Petalars (a plot device that could have proved ludicrous) turned out to be an original and touching story contrivance. 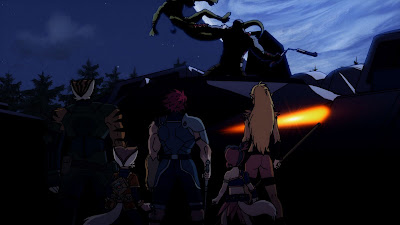 The characters each were consistent according to what we had previously seen in the last three episodes. Panthro's reveal at the end has been highly anticipated and it was carried out well. We even got to see him use his trademark nunchucks on an unfortunate lizard. The Thundertank returns from the original show and while the design appeared to be slightly sleeker, it was a fantastic throwback. Perhaps the only criticism I can muster (and it's a small one) is that the ending fight scene against the Lizard Army seemed a tad rushed. Obviously there's only so much that can be packed into a half-hour show, so it's forgivable. Overall, this was a great episode and I look forward to seeing Episode 5 next week. Hopefully the people behind this new Thundercats show can keep up the excellent work. The potential is there and it's apparent that, thus far, it's in very, very capable hands.
It's clear that the Thundercats reboot wishes to please viewers who were fans of the original show, as well as secure the younger demographic. It adds darker, more mature scenarios than the '80s iteration, while developing a richer backstory and fleshing out the characters further than they ever were before. For fans of the original, watching this, in many ways, makes you feel like a kid again. Now all I need is my plastic Sword of Omens and...Thunder...Thunder...THUNDERCATS HOOOOO!
Posted by Middle Earth Collectibles at 10:18 PM