Win a Copy of Shadowland Magazine #1 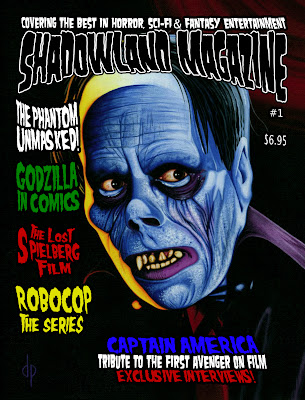 Win a copy of the magazine that covers the best in horror, sci-fi & fantasy entertainment...
Between now and August 30th you can win you very own issue of Shadowland Magazine!
Middle Earth Collectibles will be sending ten lucky winners a copy of Shadowland Magazine #1. All you have to do is sign-up for the Middle Earth Collectibles Newsletter by following this link!
Just type in "Shadowland Magazine Contest" in the body of the email and consider yourself entered. Ten winners will be chosen at random and then contacted by August 30th!
ISSUE #1's CONTENTS:
The Phantom Unmasked!
An exhaustive retrospective on the history of The Phantom of the Opera in film, television, and literature.
Godzilla In Comics: The Marvel Years
Toho's King of the Monsters in the Mighty Marvel Manner! A fond remembrance of Godzilla's 1970s comic battles with S.H.I.E.L.D., the Fantastic Four, Devil Dinosaur, the Champions, and The Avengers.
The Lost Spielberg Film
In 1982 Steven Spielberg's E.T. the Extra-Terrestrial smashed box office records, but it wasn't the film the renowned director set out to direct. We examine the origins of Spielberg's child-friendly film, which was originally intended as a horrific sci-fi/thriller entitled: Night Skies.

RoboCop: The Series
A look at the short-lived RoboCop TV series from 1994.

The First Avenger on Film!
Captain America may be Marvel's latest summer blockbuster, but what of his other on-screen adventures? A glimpse back at the Star-Spangled Avenger's 1940's cliffhanger serial, his animated show, two made-for-tv movies, and his '90s flick Marvel tried to hide.

Interview with Dwayne Pinkney
We talk with artist Dwayne Pinkney about his jaw-dropping artwork.
NOW AVAILABLE AT www.ShadowlandMagazine.com for only $6.95 (shipping included)!
Posted by Middle Earth Collectibles at 1:27 AM