Unlikely Team-Ups: Part 1 - The Shadow of the Bat

If comic books have taught fans anything, it's that while one super hero is great - two (or more) are always better. Just look at Marvel Team-Up, The Justice League, The Avengers, etc...

Of course, the quality of the super hero team up is sometimes questionable. Spider-Man teaming up with Iron Man is a force to be reckoned with, the same goes for Green Lantern pairing up with DC's other emerald crime-fighter, Green Arrow. Such winning combinations always stir up comic sales. On the other hand, Howard The Duck joining forces with the Silver Surfer: maybe not (though it has happened).

Then there's the exotic, bizarre team-ups that fall somewhere in the middle. Take for example, drum roll please...


Batman and The Shadow! 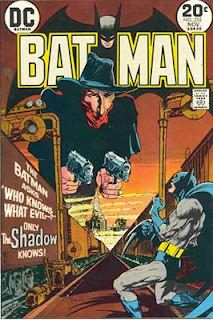 Batman and The Shadow crossed paths for the first time in Batman #253. At face value, it's a tad odd, after all, when in the DC Universe has the Shadow ever popped up? Don't recall him ever running into the Joker or Lex Luthor at any point. Guess he stuck to the shadows pretty well (har, har). Yet, bad puns aside, the characters of Batman and The Shadow do compliment each other quite nicely.
Bruce Wayne is a billionaire playboy who dresses up as a giant bat at night to combat crime, using scare tactics and a super-arsenal of gadgets to get the job done.
The Shadow is really Lamont Cranston, wealthy young-man-about-town, who dresses up in a cloak and hat with red bandana around his mouth to combat evildoers, while striking fear in the hearts of his enemies with his phantasmic powers and twin .45s.
The similarities don't stop there. Both had experience in the 'mysterious orient' - it was where Batman trained to acquire his ninja-like skills and also where The Shadow had mastered his mental powers.
Let's not forget that Batman has his loyal butler, Alfred, at his side, whereas The Shadow has Moe Shrevnitz, his faithful cab driver/chauffeur/Shadow agent.
It can be argued that both have a recurring love interest as well. Wayne has (or had, depending on which comic/era/series you're picking) Vicki Vale and Cranston has Margo Lane.
Okay, so it seems like this unlikely team-up might make for an interesting dynamic, right? After all, there's a lot of character traits to play on, ample amounts of back story, and a correlation between alter egos...
So, without further ado, let us take a look at Batman #253: 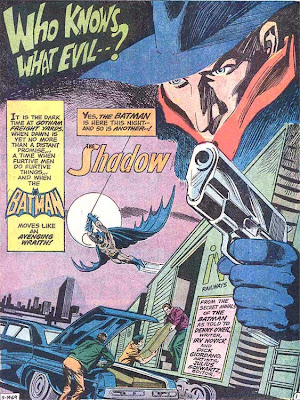 Good start. Impressive first page with The Shadow overlooking the Caped Crusader. One should expect no less from old school artwork. 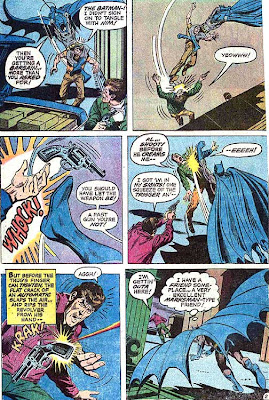 Batman spots some guys up to no good and quickly goes to town taking them out, in standard Batman fashion. 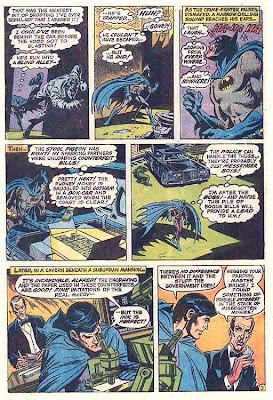 No Shadow appearance yet, aside from some laughter...wonder who that could be? 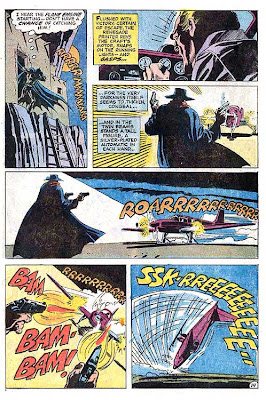 Skipping some ten pages into the comic gives us our first image of The Shadow, blasting a plane. 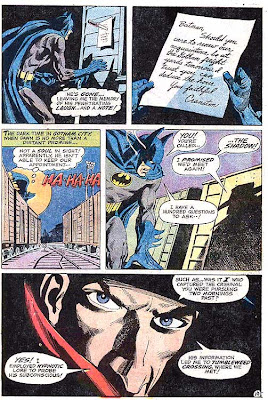 Several pages later, Batman receives a note from The Shadow, who then finally appears. 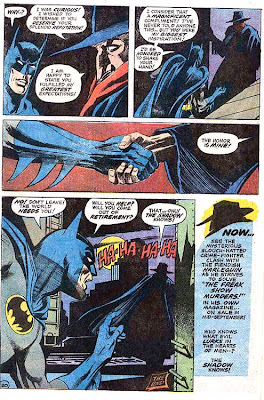 And...the end. Yes, that's right. The end. No confrontation caused by misconstrued notions of alliance, no team-up against a common foe, not even them bringing down a simple thug. Nope. The Shadow appears just to shake Batman's hand and have Batman ask if he's 'coming out of retirement'.
Hmmm...oh wait, there's more...the blurb on the right hand side of the page mentions that The Shadow will be in his own DC Comics adventure! Tackling the 'fiendish Harlequin' (no relation to Batman's female foe) while solving the 'freak show murders, no less!'
If anything else, Batman #243 is a prime example of comic book promotion. Yes, the cat's out of the bag, Batman #243 was solely intended to tell readers that The Shadow has his own comic and that he's somehow capable of taking down a single engine passenger plane with two automatic pistols. How did he do it? Who knows. Well...The Shadow knows...