The Art of Movie Posters - Then & Now: Part II: Icons of Horror 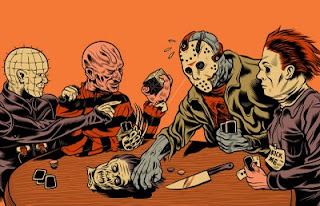 We continue our latest look at movie posters of yesteryear, in comparison with the ones of today. Our primary theme today will be the Icons of Horror - everything from Jason to Freddy to Michael.
THEN & NOW: HALLOWEEN
Only one poster is worthy coming home to...
COMPARISON:
John Carpenter's 1978 horror classic may not be a typical 'slasher film', but it surely inspired and spawned many of the '80s slasher films that followed (in fact, the Halloween franchise itself soon became synonymous with the slasher genre due to its gorier sequels). Nevertheless, Carpenter's original kept the gore to a minimum, but with intense music, a captivating - yet simple - story, and tense atmosphere, the '78 Halloween was a masterpiece of the genre. Even the poster adopts this simplistic and creative approach with the Jack O' Lantern and knife image - along with the cryptic text: "The Night HE Came Home." Rob Zombie's 2007 remake was heavy on gore and light on atmosphere. Zombie's poster features a collage of images that make up Michael Myers' mask. A stark contrast to the original's simplicity.
WINNER:
1978 poster.
THEN & NOW:  THE TEXAS CHAINSAW MASSACRE
Which poster will survive - and which one will be massacred?
COMPARISON:
It goes without saying that Tobe Hooper's 1974 poster has much more of a 'grindhouse-style' feel about it - which is perfect for the gritty, documentary-atmosphere of the film. Also, the '74 poster features the now-infamous Leatherface, gripping a chainsaw and a potential victim. This lends credence to the title, 'The Texas Chainsaw Massacre'. It's all there! Let's run through the checklist: Chainsaw? Check. Madman? Check. Someone about to be massacred? Check. Apparently the filmmakers of the 2003 version neglected to consider this, as the poster only manages to present a darkened visage of Leatherface. Not only is the 2003 poster terrible, but it lacks creativity and imagination.
WINNER:
1974 poster.
THEN & NOW: FRIDAY THE 13TH
Two posters. Only one will make it out of Camp Blood?
COMPARISON:
The 1980 Friday The 13th poster has a great feel to it with the killer's silhouette representing the backdrop for Camp Crystal Lake. It's atmospheric, has nice artwork, and does a fantastic job at maintaining the sense of mystery as to who the killer is. The new poster simply features Jason, standing menacingly in the fog shrouded woods. Overall, the '80 poster is more to look at, however, the '09 poster is effective in its own right.
WINNER:
Tie.
THEN & NOW: A NIGHTMARE ON ELM STREET
One poster is a real nightmare...
COMPARISON:
As with most poster comparisons thus far, it often becomes a question of artwork vs. photoshop. A Nightmare On Elm Street '84 (artwork) features a lot more going on than the 2010 poster (photoshopped) which, in this case, makes the original more eye-catching. You can pretty much glimpse the 2010 one and never have to look at it again - whereas the '84 version offers something a little more substantial.
WINNER:
1984 poster.
THEN & NOW: THE STEPFATHER
Which one will Daddy approve of?
COMPARISON:
This is really no comparison. The 2009 version features to hands reaching out of the shadows, gripping a neck-tie. The original features an impressive visual of the Stepfather character gazing into a mirror to see a different reflection - which perfectly coincides with the events of the film - particularly the opening scene which was shot quite differently in the remake.
WINNER:
1987 poster.
THEN & NOW: PROM NIGHT
Which one's worthy of Prom Queen?
COMPARISON:
There's really no comparison to be made. One has a masked killer clutching a blade of glass with a potential victim gleaming in it's reflection while the other has...an open mouth.
WINNER:
1980 poster.
THEN & NOW: NIGHT OF THE DEMONS
Angela's only inviting one to her Halloween party.
COMPARISON:
The 2009 poster is effective, in that it shows the Jack O' Lanterns (it is a Halloween-themed movie after all), features the house where said night of demonic activity is to take place, and has a demon's hand rising from the foggy ground. It's not a bad poster at all - but the 1988 poster takes the crown simply for it's great tagline: "Angela is having a party. Jason and Freddy are too scared to come...but you'll have a hell of a time."
WINNER:
1988 poster.
THEN & NOW: APRIL FOOL'S DAY
One poster's the life of the party...the other's been fooled.
COMPARISON:
Neither poster really makes it clear why this film is titled, April Fool's Day - however, it's clear that some semblance of thought actually went into the '86 poster (extra points for the noose-like hair) while the '08 poster is a photoshop job at it's worst.
WINNER:
1986 poster.
THEN & NOW: THE AMITYVILLE HORROR
Which one will stay and which one should 'get out'?
COMPARISON:
The '79 poster has a great shot of the house's face-like exterior, while the '05 poster portrays the house with an even darker, more eerie feel. The "For God's Sake, Get Out!" line on the original is effective - though, when all is said and done, the remake's poster captures the 'horror' a tad better.
WINNER:
2005 poster.
Posted by Middle Earth Collectibles at 9:48 PM